To help ease the lockdown boredom and to help you relax, here’s a colouring sheet based on the spring book display inside the library that you may have spotted before we closed! You can either print it off and get out your colouring pencils, or simply use the paint software that came with your computer.

Batley Library is currently closed due to the Covid-19 situation and the work of The Friends of Batley Library has been suspended for the time being.

We will be back! In the meantime, the following links may prove useful:

Kirklees Community Response – Use the website or phone them on 01484 226919 if you or anyone you know is vulnerable and needs help.

Overdrive – The Kirklees eBook library online. Use it to read books on your computer using your library card and PIN. Or download the Libby app on your phone or tablet.

Stay safe everyone, and we’ll see you all when we reopen!

During a typical sleepy Sunday afternoon in Batley, sixteen readers came together to read one of Shakespeare’s most popular comedies.

The event was a joint venture between the Friends of Batley Library and the Batley Poets.

Mohammed Barber, one of the volunteers for the Friends of Batley Library who organised the event said, “most people’s relationship with Shakespeare starts and ends at school. I was lucky in that I had a great teacher who inspired a love for the bard. I know that not everyone has that.

“All the thy, thine, and thou can be intimidating. Couple that with theatres which can be expensive and a bit snobby, it can be a massive turn off for working class people. That’s why I wanted to have a stripped-down performance in the library. The play and a bunch of people who want to read the play, irrespective of experience; that’s it.”

A Midsummer Night’s Dream brings together love, magic, fairies, and an overzealous weaver whose head gets transformed into that of a donkey by a goblin, all set in Ancient Greece. The comedy remains hugely popular with audiences and is consistently performed on stage. The play has given rise to several famous phrases such as “Lord, what fools these mortals be!”, “The course of true love never did run smooth”, and “Though she be but little, she is fierce!”.

The afternoon was a great success, full of great readings with no shortage of laughs, or biscuits.

“When I found out I was reading Puck I had no idea who or what Puck was, or the relevance or importance of the character. I have to admit, I did follow the script with a radio play the day before, to be a little more familiar with the character. On the day itself I was nervous but once I’d read a few lines and heard the others, especially the laughter, I really enjoyed it. I loved having the last monologue, it just felt special.”

Plans are afoot for more readings of the bard’s plays in the coming months.

Magic was afoot at the library on the 10th February in a belated Harry Potter Book Night celebration. Muggles were arriving at the library only to suddenly remember they’d left the stove on, so only witches and wizards took part in the magical classes happening inside.

On arrival the children were sorted into houses by the ancient sorting ceremony and then sent on their way to learn wizardry. Wand making, Herbology, Potions, Care of Magical Creatures and a special class on owls were all on the curriculum. Fun was had and a lot was learned before it was time for a glass of Butterbeer and a chocolate frog in the Great Hall.

With that, it was time to go home. The house elves cleared up all evidence of any magical goings, the anti-muggle protection spells were all removed and the library reopened the following day as if nothing had happened.

For the past few years we have been holding occasional book sales, selling off a mixture of donated books and ex-library stock to raise funds for The Friends of Batley Library. In 2019 we aim to make these sales a monthly event so we can help support the library even more!

Some things we have done with the money raised so far:

Things get added to our sale all the time, so come along every month and see what’s new! Everything’s only 20p (except for the £1 Ordnance Survey maps and a selection of reference books for £1) and our next sale will be on the 15th and 16th February.

On Saturday 22nd December the library opened early for a few select guests for games, food, singing and fun! There was even a very special visitor who parked his reindeer outside and came in to chat with the children.

Time stood still in Batley Library. The Hatter had nodded off with the Dormouse at his tea party while the March Hare was away doing ‘harey things’ in the woods. Alice was nowhere to be found, but the tea party was rudely invaded by a variety of costume festooned characters. Children and adults alike were encouraged, nay forced, to chemically conjugate a cup of green tea for the Hatter to bring him round from his sleep for the quest to begin. The Hatter was woken not once, not twice, not even thrice, but fourice times from his slumber by groups of potential escapees, all of whom had entered the library with the sole intention of getting back out as quickly as their powers of riddle and puzzle solving would allow them. ‘NO ROOM! MOVE!’ cried the Hatter, and the game began.

‘SPARKLE!’ Shouted the Hatter and many did, though sadly, not all. With a forty-minute time limit to solve the six Wonderland challenges, time was short and so was the Hatter’s temper. A quest began to find number, word and directional lock combinations, collecting red rose clues as they went. The groups encountered the invisible and the visibly reversed.“Curiouser and curiouser,” a trick of the looking glass, nothing was as it first seemed. With time and the groups’ credibility running out like an hourglass with an enema, the pressure was palpable. Beads of sweat were forming on the Hatter’s forehead as the obvious was ignored in favour of the unfathomably wrong!With the mercury streaming through his grey matter, the Hatter was relieved and a little saddened by the ultimate success of every group, with the fastest group coming in two minutes under time and the slowest group coming in 25 seconds under time. No one was ultimately locked in the Library for the rest of Halloween, and all participants had a lovely tea party of their own in the basement with tea, beverages, jam sandwiches, an assortment of fancy cakes and jam tarts.

‘BRING ON THE NEXT CANDIDATES. I WANT MORE!’ exclaimed the Hatter.  And he’ll get more on Saturday 15th December! Check out Ticketsource for details on tickets!

We applied to the Aviva Community Fund for some funding to run adult education classes at Batley Library and the good news is, we made it through to the voting stages!

This is a project designed to deliver adult education from September 2019. This is an area that has become non existent within the local area, with people having to travel miles to enable themselves to achieve the education they would like and need at a later stage in their lives.
This will be a huge boost to our community and provide much needed skills to those benefiting from it.

The aim is for the participants to achieve a GCSE in Sciences as a stepping stone to continue studying at A level (this would be done locally too with the funding).
The money will make a difference, as it will be used to equip a classroom with an interactive whiteboard and Tablets / IT equipment, which are vital to the course criteria.

We would like to encourage people to vote for this project to inject some much needed further education into the area and enable people to reach their potential regardless of circumstances.

You can sign up to vote for the project here. You get ten votes so you can use them all on our project, or spread them out amongst other worthy causes, whichever you choose!

On Wednesday 1st August we celebrated the life of local historian, and Friends member, Malcolm Haigh in a special event at the library. 2018 sees the 40th anniversary of Malcolm’s book A History of Batley 1800 – 1974 and we decided that Yorkshire Day was the perfect day to celebrate. Unbeknownst to Malcolm!

With the help of the Batley Local History Group and Malcolm’s friends and family we organised a ‘This is Your Life’ event for him, where people came together to share their memories of Malcolm and what makes him so special. At the end he was presented with a painting, by local artist and Friends member Steve McGrath, a cake by Nix Catering and Cakes and, of course, a big red book! 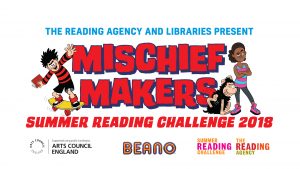 The Summer Reading Challenge is here once again, and this year the theme is Mischief Makers! This year we’re headed to Beanotown to help Dennis the Menace and friends find a hidden treasure chest full of pranks.

Joining in with the fun is easy. Step one: be a child aged 4-11 (sorry grown ups!) step two: read six books over the summer holidays. For every two books you read, you will receive a reward pack with special prizes and clues to the location of the buried treasure. When you return your sixth and final book, you will be rewarded with a certificate and a shiny medal! Step three: wear your medal with pride!

The challenge starts today (14th July) and you have until the 15th September to complete it. So what are you waiting for? Get down to the library and read your first two books now!